In "We Knew Mary Baker Eddy," Third Series, is related the healing through Christian Science of Joseph Mann, who was accidentally shot and who was later given up as dying by four eminent physicians. Mr. Mann's first words when he returned to consciousness were, "Is this something I can learn, and do for others?"

The article states that immediately after his healing he began to study the Christian Science textbook, "Science and Health with Key to the Scriptures" by Mrs. Eddy, and that many upon hearing of his healing went to him for help, and he healed them. He established a successful Christian Science practice in Boston. Ten years later he was a member of Mrs. Eddy's last class, the "class of seventy." 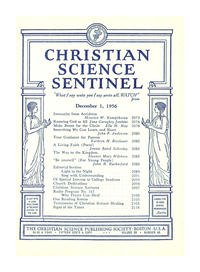