MAN IS NOT A SUPPOSER—HE KNOWS

We frequently hear people say, "Suppose that," and then follows a morbid, fearful picture of some evil contingency. In an article entitled "Where Art Thou?" Mary Baker Eddy, writing of the allegory of the talking serpent tempting two mortals, says (Miscellaneous Writings, p. 332), "A sense of evil is supposed to have spoken, been listened to, and afterwards to have formed an evil sense that blinded the eyes of reason, masked with deformity the glories of revelation, and shamed the face of mortals." 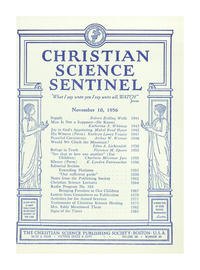