THE FURTHER DOMINION AVAILABLE FOR EVERYONE

The student of Christian Science is usually soon aware that improvement in his experience—his health, capability, relationships, success, or anything he is concerned with—is not dependent on factors beyond his control. He gains a new understanding of himself and sees that he is not limited, as he had seemed to be. He sees that he has a control beyond what he had recognized over his present circumstances and also over his prospects.

Such changes of outlook arise naturally from the teachings of Christian Science and are often supported at once by striking evidences in the healing of disease and the overcoming of other difficulties. The evidences multiply as one advances in understanding, but even the beginning student readily sees that the opportunity before him is unbounded. It is, essentially, an opportunity for improvement in his thought; and as he grasps the implications of this fact, he is usually challenged and inspired as by nothing else he has ever known. No longer do his problems seem to arise from material conditions, the thoughts and acts of others, or any other circumstances about which he can do little or nothing. He sees that his problems are in his own thought and that as his thought is clarified and enlightened in the manner which Christian Science shows to be both possible and natural, the problems are solved. 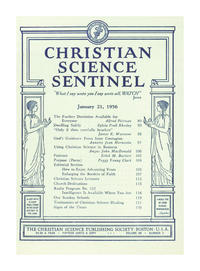