"THE BAGGAGE OF STERN RESOLVE"

A traveler who was carrying her luggage in paper shopping bags, overloaded with things considered necessary for the journey, dropped one article after another as she hurried along the station platform. In retrieving one item she lost another; one shopping bag after another broke, and the contents were scattered under the feet of the hurrying travelers. As she stood disturbed, confused, and disconsolate in the midst of the numerous objects she had considered needful, a kind fellow traveler asked, "Do you need all these things?" And she added: "An experienced traveler is known by the baggage he does not carry. Why not discard what is not really necessary and go on your journey less burdened?" The traveler heeded the advice. With the loving assistance of this friend she lightened the load and went her way rejoicing.

Now all this—the traveler with her overloaded shopping bags, the kind friend, the good advice and the acceptance of it—was only part of a night dream. The student of Christian Science who had the dream pondered the thought, "An experienced traveler is known by the baggage he does not carry." She found in "Science and Health with Key to the Scriptures" this statement of Mary Baker Eddy's (p. 514): "In the figurative transmission from the divine thought to the human, diligence, promptness, and perseverance are likened to 'the cattle upon a thousand hills.' They carry the baggage of stern resolve, and keep pace with highest purpose." 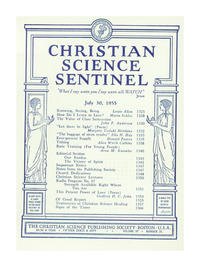