An executive confided to a Christian Science practitioner that he had just resigned his position. Aggressive methods had obtained what he had sought, but the position had proved to be a bitter disappointment. Shortly after this interview another businessman came to the same practitioner. A very desirable position was open. He wanted help in securing it. Recognizing it as the one from which the other executive had just resigned, the practitioner asked, "Are you sure that this is right for you?" Haltingly the businessman replied in the negative. The practitioner was able to help both men so that their thought was exalted above the erroneous practice of human outlining.

Does a human objective seem desirable? To work and pray for material place or things is not the correct basis for achievement. Willful human positiveness outlines. It is not spiritual knowing and must be surrendered before one can arrive at the right answer to a problem. To pray for material things is to open one's mental door to disappointment. No one can outline his way into the kingdom of heaven. One should desire the will of God to be expressed in his affairs. In reality nothing can hinder the unfoldment of God's plan. 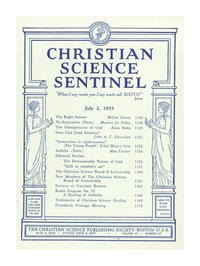