I am deeply grateful to Christian Science...

I am deeply grateful to Christian Science for all the blessings which I have received from it. I was still a child when my mother heard about this marvelous religion from a woman who later became our practitioner. Christian Science made a deep impression on me, and with the help of this friend I read "Science and Health with Key to the Scriptures" by Mary Baker Eddy, which had not been translated into French at that time.

In 1917 my fiance was healed in a short time of cerebrospinal meningitis. This strengthened my faith in the healing power of Christian Science. Later, when he was lost in the First World War, I was healed of my great sorrow through a deeper study of the Bible and Science and Health. I devoted a large part of my time to the study, and thus I found courage to live and gained the joyous understanding that Life is eternal, because Life is God. The understanding of Truth has since enabled me to overcome many other difficulties. In 1922, with the help of a practitioner, I was completely healed of scarlet fever in two weeks.

Send a comment to the editors
NEXT IN THIS ISSUE
Testimony of Healing
Christian Science was introduced... 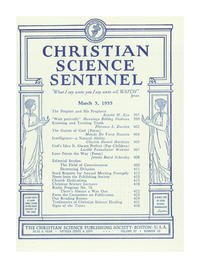