The Christian Scientist has much for which to thank God. He has received benefits which only divinity can bestow—the demonstrable understanding of God as All, of man as God's inseparable expression, and of the Father's will as the resistless law of man's life. The Scientist's experience has become more harmonious, his health has been restored or improved, his limitations are breaking down. He feels security through his grasp on Truth. But his greatest reason for thanking God is that the truths he acknowledges are enabling him to pierce the hardened mental state of materialism and are giving him glimpses of pure spiritual reality. He knows that the clearer his views of creation are, the more speedily will Christian Science be accepted by all men.

The Scientist thanks God that his Leader, Mary Baker Eddy, saw so much progress in the movement she founded—saw her Church grow from a tiny group who accepted her teachings to a world-encircling organization, dedicated to awakening the race from the mortal dream of material existence to real life in Spirit. Only a period of eleven years extended between the dedication in 1895 of the original edifice of The Mother Church. The First Church of Christ, Scientist, in Boston, Massachusetts, and that of its Extension in 1906. One has only to observe these two buildings to realize the rapid growth which was already taking place in the Christian Science movement. 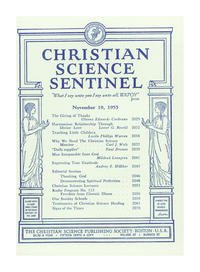