"THAT NOTHING BE LOST"

Many students of the Bible, in considering the proofs of supply related there, find the account of Jesus' feeding of the five thousand with five loaves and two fishes one of the most inspiring. The first three Gospels—Matthew, Mark, Luke—tell us that Jesus took the five loaves and two fishes and blessed them. Then he broke the loaves and gave them to the disciples, and they in turn gave to the multitude. We are also told that when they all had eaten, they took up twelve baskets full of the fragments that remained.

But John, the clear-sighted and much-beloved disciple of Jesus, gives us more to ponder on this subject, for he says (John 6:12), "When they were filled, he said unto his disciples, Gather up the fragments that remain, that nothing be lost." Did not the remaining food, and the directive to gather it up, symbolize something besides the ever-presence of God's providence, for that had already been proved. Certainly it was more than just economy or tidiness on the part of Jesus. Could it not be that this undeniable evidence was retained for the purpose of invalidating any suggestions that the multitude had been mesmerized or hypnotized into just believing that they had been fed? 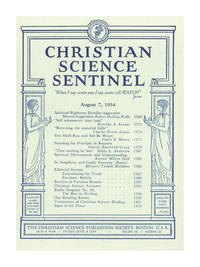