[Following is the text of the program of the above title released for broadcast the week end of May 7-9 in the radio series, "How Christian Science Heals," heard internationally over about 600 stations. This is one of the weekly programs produced by the Christian Science Committee on Publication, 107 Falmouth Street, Boston 15, Massachusetts.]

RADIO PROGRAM No. 34A - Awaken to Your God-given Health!

On this program Mrs. Mary Hughes Sweeney of Chicago, Illinois, told her own experience, as follows:

During the many years in which I have been a student of Christian Science, I have experienced many physical healings. Some have been outstanding examples of the healing power of God. One, in particular, has been the cause for much gratitude. This is the healing of frequent migraine headaches. When these came I would usually be incapacitated for at least one day, often more. My mother had been a victim of this trouble, and as I grew up I found myself manifesting all of its unpleasant and uncomfortable symptoms. At first I would always ask someone else to help me in Christian Science. This always benefited me, but it did not seem to prevent the frequent return of these headaches. I began to see that I needed to eradicate some form of erroneous thinking in order to effect a permanent healing. 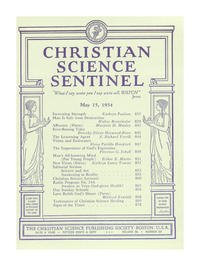