Teaching the Practice of Christian Science

Of the teachings of Christ Jesus our Leader, Mary Baker Eddy, writes in the Christian Science textbook. "Science and Health with Key to the Scriptures" (p. 26): "Our Master taught no mere theory, doctrine, or belief. It was the divine Principle of all real being which he taught and practised."

It is important that Sunday School pupils understand that the teachings of Christian Science, like the teachings of the Master, are "no mere theory, doctrine, or belief;" that Christian Science is divine law; that it is the truth which Jesus taught; and that it is as demonstrable today as it was in his time. Just as Jesus, in order to convince John the Baptist of his Messiahship, instructed John's messengers to return and report the great healing work which they had seen, so it should be pointed out to Sunday School pupils that the Christian Science textbook contains one hundred pages of testimonies of healings which have come about without the help of a practitioner, but as a result of the reader's acceptance of the Christ, Truth, as presented in the textbook.

Send a comment to the editors
NEXT IN THIS ISSUE
Testimony of Healing
I first learned of Christian Science... 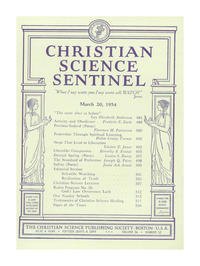