[Following is the text of the program of the above title released for broadcast the week end of December 10-12 in the radio series, "How Christian Science Heals," heard internationally over about 600 stations. This is one of the weekly programs produced by the Christian Science Committee on Publication, 107 Falmouth Street, Boston 15, Massachusetts.]

RADIO PROGRAM No. 65 - You Can Have God's Help Now

On this program Mrs. Grace V. Dickinson of New York, New York, told of her own experience as follows:

For eighteen years I suffered severe attacks of asthma. During that period I turned to several physicians for help. All declared that there was no known cure. These physicians were most kind and did all they could to relieve me. However, I grew steadily worse. A change of climate failed to give me relief. 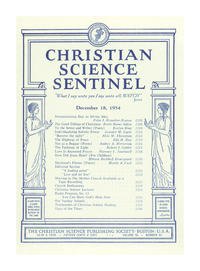