It is with sincere gratitude that I...

It is with sincere gratitude that I submit this testimony. When my eleven-year-old son suffered from a tumor on the brain some years ago everything possible was done for him, including a major operation and a series of X-ray treatments. The surgeon who operated on him told me that if the symptoms returned nothing could save him. Shortly after this verdict all the symptoms returned, and he rapidly grew worse. It was then proved that "man's extremity is God's opportunity."

I was invited to attend a Wednesday testimony meeting in a Church of Christ, Scientist, and was very much impressed by what I heard, especially the testimonies. These gave me hope, and I asked to be introduced to a practitioner. This was done, and at my request she visited my son. Immediately he started to improve. After six months of treatment in Christian Science he was back at school perfectly well. He has since attended a university and obtained a law degree.

Send a comment to the editors
NEXT IN THIS ISSUE
Testimony of Healing
Over a period of years I have... 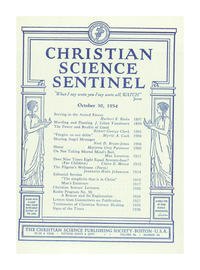