A recent issue of The Christian Science Monitor reported an important meeting of high government officials for considering the over-all effect of the rapid development of atomic weapons. It was expected that a decision could be reached as to what steps should be taken to save the nations of the world from complete destruction. The problem under consideration was named "Operation Survival."

The Christian Scientist knows how to meet the challenge of fear, insecurity, and threat of destruction which faces and terrifies mankind today. He has a definite duty to perform for his own security and for that of the world. He strives to follow consistently in the way mapped out by Jesus and explained scientifically to us by Mary Baker Eddy in Christian Science. 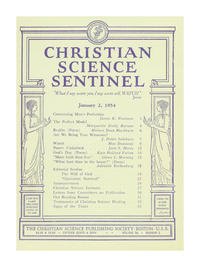