[The following accounts of experiences of servicemen and servicewomen have been received by the Activities for the Armed Services Department and are now shared with the Field.]

An officer who had experienced many healings in combat in World War II seemed to be under a cloud of despair and discouragement at his new base. After a testimony meeting one evening the officer talked over his problems with the Christian Science Minister. The thought of place was discussed because the officer said he was being subjected unjustly to some training and experiences he felt he did not need. The officer prayed over the truths given to him by the Minister, which were to the effect that God governs His ideas and that man always is in his right place. 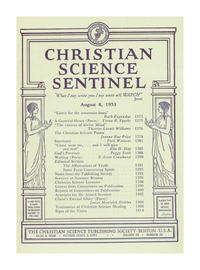