WHAT MAKES THE MAN?

In a class in a Christian Science Sunday School the discussion had centered around a statement which appeared in the Lesson-Sermon in the Christian Science Quarterly for that week. The statement was in "Science and Health with Key to the Scriptures" by Mary Baker Eddy (p. 537): "A knowledge of evil was never the essence of divinity or manhood." The class was comprised of girls in the last year of high school and the first year of college. They immediately saw that a knowledge of evil could not be the essence of divinity, for the Bible clearly states that God is "of purer eyes than to behold evil" (Hab. 1:13). However, several of the girls said that many of the boys of their acquaintance must have accepted the suggestion that a knowledge of evil constituted manhood. These boys believed that if they used some profanity now and then and indulged in smoking and social drinking, this display of so-called worldliness proved them to be men.

The teacher then asked if this aggressive argument were confined only to the boys or if it sometimes handled girls. After considering the question, the girls frankly admitted that it sometimes tempted them under the guise of sophistication, smartness, or broad-mindedness. At this point the questions were asked: "If a knowledge of evil is not the essence of manhood, then what is? What constitutes man?" 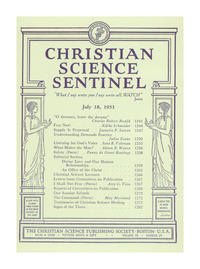