"And it came to pass, when the Philistine arose, and came and drew nigh to meet David, that David hasted, and ran toward the army to meet the Philistine. And David put his hand in his bag, and took thence a stone, and slang it, and smote the Philistine in his forehead, that the stone sunk into his forehead; and he fell upon his face to the earth" (I Sam. 17:48, 49).

A Christian Scientist listened amazed as that passage was read by a First Reader as part of his selections from the Bible at a Wednesday testimony meeting. She thought that she knew the story of David and Goliath very thoroughly. But for the first time these words stood out from the rest: "David hasted, and ran toward the army to meet the Philistine." He ran forward! Thoughts began to unfold. Not only was David unafraid of the seeming vastness of error as typified by Goliath, but he had no hesitation or reluctance in going forward to prove its nothingness. 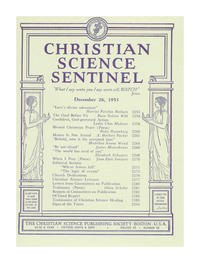