During the years in which I have...

During the years in which I have been studying Christian Science it has met many problems for me, among them being what was probably a compound fracture of the skull. A gentleman who was present when I was injured suggested that I be taken to a hospital at once; but I insisted on being brought to my home, several miles away. On the way home a woman in the car, who was not a Christian Scientist, offered to call a practitioner for me, and I gratefully accepted her offer. Later that evening I was able to talk to the practitioner myself.

This happened on a Saturday, and on the following Monday I was at my desk in the office. In about six weeks all trace of the accident had disappeared, and no time from my work had been lost. A doctor in charge of my company's medical department told me later that the condition undoubtedly had been a compound fracture. This experience happened many years ago, and the healing has been permanent. I have also been healed of pneumonia.

Send a comment to the editors
NEXT IN THIS ISSUE
Testimony of Healing
Christian Science healed me of... 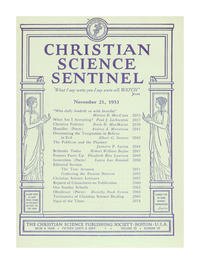