"DURING THE BATTLE THE VICTORY CLAIM"

When the poet wrote, "During the battle the victory claim" (Christian Science Hymnal, No. 204), she must have known that to claim victory after a battle is won is easy enough for anyone; but to claim it during the battle, right in the midst of the fury and the fighting, the tumult and the smoke, is not always easy. Christian Science asks us to do just this. And it bases its demand upon the words and works of Christ Jesus, who, in the face of seemingly indisputable evidence to the contrary, proved the victory of good over evil, of supply over want, of health over sickness, of Godlikeness over sin. He saw victory, and victory only, for he saw God and God's workmanship only. "Jesus beheld in Science the perfect man, who appeared to him where sinning mortal man appears to mortals. In this perfect man the Saviour saw God's own likeness, and this correct view of man healed the sick." So writes Mary Baker Eddy in the textbook, "Science and Health with Key to the Scriptures" (pp. 476, 477)

Jesus claimed victory in the midst of the battle despite a host of aggressive suggestions acclaiming the supremacy of evil. So, too, must we. And Christian Science lovingly and wisely instructs us how to do so. A young mother was able to do this as she sat beside the bedside of her young son, who to all appearances was desperately ill. Into her thinking rushed the most alarming suggestions of a much-propagandized, dreaded, and crippling disease. Then, like a fresh breeze, the words of the hymn quoted at the beginning of this article came to her and literally blew the mists of fear and tension away. 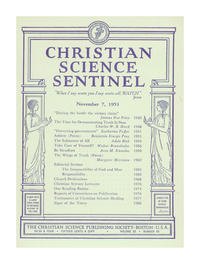