Just how far can one truly see? This is a searching question, and one which every sincere Christian should ask himself often. This ability determines our experience, to a degree, as it did that of Abram when God said to him (Gen. 13:14, 15), "Lift up now thine eyes, and look from the place where them art northward, and southward, and eastward, and westward: for all the land which thou seest, to thee will I give it, and to thy seed for ever."

Centuries later, when Christ Jesus put to the test the vision of his disciples by asking (Matt. 16:15), "Whom say ye that I am?" it was Simon Peter who declared, "Thou art the Christ, the Son of the living God;" and for this evidence of his discernment he received warm commendation from the Master. At another time Peter was the only disciple who expressed a desire to emulate his great Teacher by walking on the water as he did. Although the Master knew full well Peter's limitations, he again approved of Peter's vision by bidding him to come to him on the water— which he did, at first successfully. When he faltered, Jesus saved him, but rebuked his fear with the words (Matt. 14:31), "O thou of little faith, wherefore didst thou doubt?" At no time, however, did he counsel him to have less vision, but rather always encouraged him to approximate his vision with his demonstration. The importance of discernment was further brought out by Christ Jesus when he said to the people (Luke 12:56), "Ye can discern the face of the sky and of the earth; but how is it that ye do not discern this time?" It is plain that he expected them to pierce the mist of outward appearance and to discern reality. 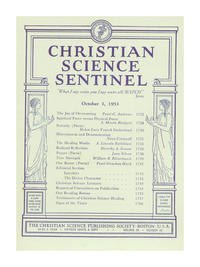