In gratitude to God for Christian Science...

In gratitude to God for Christian Science I give this testimony. While on my way home one evening about nine years ago I became giddy and lost consciousness. I was later found in an unconscious condition by a policeman. As I did not at once regain consciousness, my mother was called to the house into which I had been carried. Not being in sympathy with Christian Science, she called in her doctor, who was not able to restore me to consciousness and therefore sent for an ambulance to take me to a medical nursing home. Some days later a specialist was called in. His opinion confirmed that of the doctor: I was suffering from a complaint which would make me liable to future attacks, but if I took a certain drug regularly for two years the attacks might possibly become less frequent and less violent, though I should never be fit to drive a car again or to lead a normally active life.

Through a Christian Science friend who came to my room I was able to get help from a practitioner. Feeling I should not be in a medical nursing home, this practitioner got in touch with another friend, who came to see me and made the necessary arrangements to take me to a Christian Science House. I cannot describe the calm, peace, and gentleness of the atmosphere of that House and the love that was shown me there. I am grateful to know that such places exist. 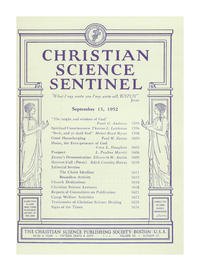