A Little girl asked a new schoolmate, who seemed interesting and different from her other playmates, to come to her home one afternoon. The new girl lived in a part of the town where only people who had come from other countries lived. These people were called foreigners.

One day after the two young friends had spent a lovely afternoon together and the schoolmate had gone home, the little girl was told that she must not invite the schoolmate to her home again. She liked her new friend and asked why she could not play with her. Her mother replied: "She is just as good as you are, but 'off a different piece of cloth.' Treat her well, but let her alone." This puzzled the little girl. She began to wonder if people from other countries were different and not to be trusted just because they did not have the same customs and language. Obedient to her mother, however, she no longer played with the new schoolmate, although she still liked her very much. 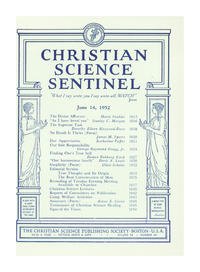