Christian Science came into our...

Christian Science came into our home at the time of an illness of our mother. At that time five daughters, all in their teens, became students of Christian Science. Some of us went to the Christian Science Sunday School, and we all became church members and later had class instruction. At the hour of this first dawning of the Christ, Truth, in my consciousness I can distinctly remember thinking, Wouldn't it be wonderful if there really were a method of healing as in the days of Jesus? I was later to learn that there is.

My first visit to a Christian Science practitioner was for the healing of a goiter which I had had for many years. This condition was considered hereditary in my father's family. The discomfort which accompanied this difficulty finally disappeared, and I was healed of severe chronic sore throat and laryngitis, from which I had suffered as long as I could remember; but the healing of the goiter did not come for a number of years. When it did come, it came normally and naturally and at a time when I was not even looking for it. The goiter just disappeared. And it has always seemed significant to me that at the time of the healing of the chronic sore throat there was also a healing of unpleasant dispositional traits.

Send a comment to the editors
NEXT IN THIS ISSUE
Testimony of Healing
I wish to express my deepest gratitude... 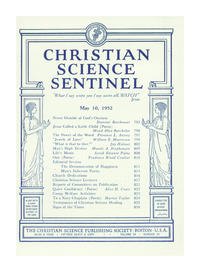