Christian Science was first brought to my attention in 1917 by a man whom my husband and I met in a large midwestern city, where we were filling a vaudeville engagement. This man was a Christian Scientist, and we were impressed by his unusual viewpoint on religion, I was suffering from a severe cold, and although I listened with interest to what he said. I did not entirely understand how I could be healed in Christian Science.

By the time we arrived at our next destination, several days later, I was in great pain. As I sat rather sorrowfully backstage, waiting for my husband to attend to necessary business, a woman came out of her dressing room. She stopped and asked me if she could be of assistance. I thanked her and said that I did not think so. I told her that I had not slept for several nights and that I was not able to lie down. She lovingly assured me that Christian Science would help me and at my request treated me metaphysically. I was healed in that one treatment. 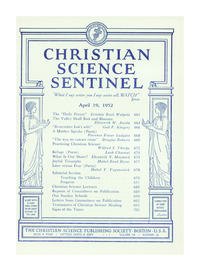