The following experiences concerning service men and women have been sent to the Camp Welfare Activities department and are being shared with the Field:

Case of accident met at an eastern camp

A Worker was told that a Christian Scientist was taken to a station hospital and was in need. The young man had been injured while on police duty and was suffering from torn muscles and a possible broken back. He asked the Worker for specific treatment, remarking he never had had to "face anything like this before"—it seemed so "physical." Treatment was given at once, and in a week the serviceman was out of bed. X rays showed no broken back, and muscles already knitting. When the Worker called the third week he was told the young man had gone back to duty.

Send a comment to the editors
NEXT IN THIS ISSUE
Testimony of Healing
"If you really want to hear the... 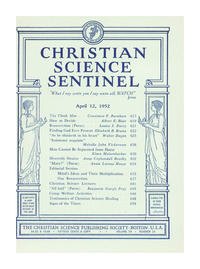