Before becoming interested in Christian Science, I was a habitual drinker and an inveterate smoker, and I used profane language. I had suffered greatly from ulcers of the intestines for many years, and treatment over a long period by medical specialists afforded me only temporary relief. This was at a period when the world seemed to be going through a great financial depression. I had been out of work for six months or more and had accumulated debts of several hundred dollars, and I feared that I would lose my house. There was much inharmony in the home because of our financial difficulties and also because of my spending so much money on medical specialists and receiving no permanent help. Due to my physical condition and worry I became a nervous wreck and was much discouraged. In my extremity I got down on my knees and called out to God for help.

I think it was the following day, while I was waiting at a trolley station, that I noticed a box containing some Christian Science literature, and I took a copy of The Christian Science Journal. I read the copy through, and the logic of what I read appealed to me. I lost no time in going to a Christian Science Reading Room, where I borrowed a copy of the textbook. Science and Health by Mrs. Eddy. While reading this book, I was instantaneously healed of the ulcers and of the drinking, smoking, and profanity habits. Work was obtained, the financial condition was soon straightened out, and harmony in the home was restored. Healings experienced later were of bronchitis, gastritis, fallen arches, and hernia.

Send a comment to the editors
NEXT IN THIS ISSUE
Testimony of Healing
Christian Science is truly our sure... 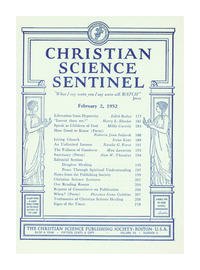