As I look back upon my introduction...

As I look back upon my introduction to Christian Science I realize the truth of Mrs. Eddy's words (Science and Health, p. 494), "The miracle of grace is no miracle to Love." My experience has indeed been blessed by "the miracle of grace." My faith in the teachings of my church had been shaken; and this fact, together with gallstones, which the doctor said would require a major operation to correct, turned me in desperation to this Science, I had planned to be married that year, but due to my condition my plans had to be set aside.

For some months I had been on a strict diet, but without receiving appreciable lessening of the attacks from which I suffered. After my first visit with a practitioner I was so strengthened and uplifted that I walked home from her office, a distance of about three miles. I resumed normal meals gradually as the fear of food was overcome, and within one month I had gained ten pounds. With continued help from the practitioner my health improved so markedly that I was able to go West for my marriage as planned. 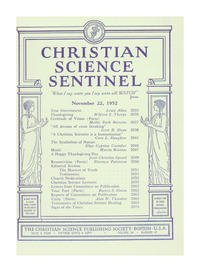