Having reaped the benefits of...

Having reaped the benefits of Christian Science for many years, I should like to relate some of my experiences that they may be of help to others. I took up the study of Christian Science in the hope of helping our baby daughter. In a short time not only had I helped her, but I was healed of constipation of long standing. Many other ailments also disappeared.

A testing time came about eight years after my first healing. I was taken ill, and although I worked very faithfully in the way we are taught in Christian Science and had help from a faithful practitioner, my condition grew worse until the suggestion of death became very strong. My husband, not being a student of Science, felt it was unfair to him and our two small daughters for me not to consent to a medical examination. I agreed to comply with his wishes and was taken to a well-known clinic, where an examination was made. The ailment was pronounced gall bladder trouble, and the doctor said an operation was my only hope but they could not be sure it would cure me.

Send a comment to the editors
NEXT IN THIS ISSUE
Testimony of Healing
It is a great privilege to express... 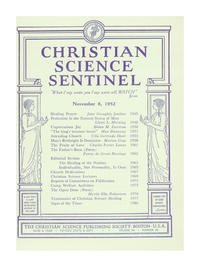