Christian Science makes clear the issues underlying the world's unrest; and the more clearly the Christian Scientist comprehends these issues, the greater will be his contribution to the peace of mankind. This Science shows that the conflict is between the belief that matter is the basis of life and mind and the revealed and demonstrable truth that God, the only Mind, is the source of man and of the spiritual universe. Mary Baker Eddy writes in "Science and Health with Key to the Scriptures" (p. 268), "Belief in a material basis, from which may be deduced all rationality, is slowly yielding to the idea of a metaphysical basis, looking away from matter to Mind as the cause of every effect."

One's standpoint on this issue determines his theories of government and worship, his prospects of life, and his salvation from every limitation. Starting from matter as the cause of every effect, material rationality would discard God and have matter evolve mortals—advancing them from apehood to mortal manhood through processes of material law and self-determination. Such an evolution, not being subject to the control of Love, divine Principle, could culminate in nothing but godless effects of envy, immorality, destructive power, war, self-annihilation—all companions of matter. 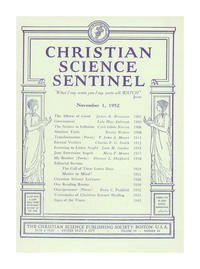