The testimonies in the Christian Science...

The testimonies in the Christian science periodical have given hope and courage to me through many years. In deepest gratitude to God I submit my own testimony.

When I was a young girl, my parents became students of Christian Science, but I acquired no practical knowledge of it. I had always been strong and well, but while I was in high school my health began to fail. After I married and son was born, I had a severe attack of malarial fever. I became very ill and too weak to do any work. A severe kidney disease manifested itself, also other discordant conditions, and death seemed near. in this hour of extreme need AI turned to Christian Science with all my heart, reading Mrs. Eddy's writings and the Christian Science periodicals every available hour. It was some time before I was completely healed. My strength gradually returned as one erroneous belief after another disappeared. Severe bronchial colds ceased, and I was indeed made anew. It was wonderful to be well and strong again, but more wonderful than words can describe to have found a God I could love and understand. The greatest joy I have ever known has been in a deeper and richer love for all mankind.

Send a comment to the editors
NEXT IN THIS ISSUE
Testimony of Healing
"Thine, O Lord, is the greatness... 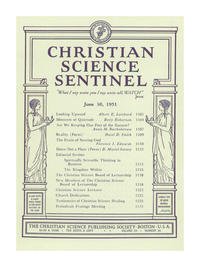