"THAT MOST IMPORTANT OF ALL ARTS"

Having lived Christianity for many years, Mary Baker Eddy discovered the Science of Christianity, proved widely for herself and others that it was the same Science that Jesus used, and then gave it to the world in her textbook, "Science and Health with Key to the Scriptures." Also, Christianly scientific healing is the outward sign to this age that the Comforter, promised by the Master, is with us and that all may become aware of its tender presence. 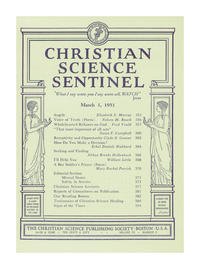