GOD'S LAW AND ITS EXPONENTS

When the liberties of a nation are threatened, the people of necessity strengthen themselves by defense. The laws of the land are framed to curb license and to safeguard liberties. Just laws are framed because the people require justice and because security is most surely found by obedience to constituted authority. Law demands obedience, and those who are obedient find law to be protective and remedial, not afflictive.

Mary Baker Eddy defines Christian Science (Rudimental Divine Science, p. 1): "As the law of God, the law of good, interpreting and demonstrating the divine Principle and rule of universal harmony." Thus in Christian Science we find the highest law, namely, the law of God, which holds complete jurisdiction in true consciousness. This law controls all motives, movements, and manifestations of Life and intelligence. Mrs. Eddy writes (No and Yes, p. 26): "God holds man in the eternal bonds of Science, —in the immutable harmony of divine law. Man is a celestial; and in the spiritual universe he is forever individual and forever harmonious." 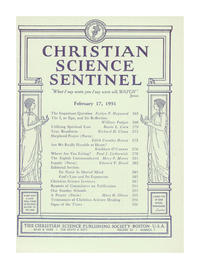