Christian Science has been my only physician for nearly twenty years, and I am most grateful for the physical, mental, and financial healings that have come to my family during that time. When our son was attending college in a city about ninety miles distant from home, the nurse called me one morning to say that my son was ill with a streptococcic throat and that he had been placed in the infirmary. I thought that as long as I could not be with him, the infirmary was the best place. However, the nurse called me again a little later, saving the boy was not responding to medical treatment and was much worse. After I hung up the telephone receiver, the thought came, "Ye cannot serve God and mammon" (Matt. 6: 24). We drove up to the school and brought him home and asked help of a Christian Science practitioner. To mortal sense our boy was in bad condition, but the next day he was better, and the following day he could eat normally and went downtown. The third day he drove the car back to college. When he reported to the nurse at college, she was much surprised, saying, "Why, I did not expect to see you for a month!"

Words are inadequate to express my gratitude to Mrs. Eddy for giving Christian Science to the world. —(Mrs.) Gertrude Goodrich, Manchester, Washington.

Send a comment to the editors
NEXT IN THIS ISSUE
Testimony of Healing
During my childhood my father... 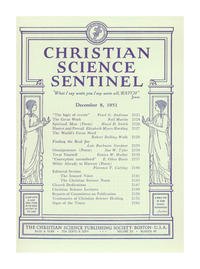