At birth I had cataract on one...

At birth I had cataract on one eye, and in addition there was very little sight in it, just enough to distinguish light from darkness. Over the years the normal eye had become progressively weaker, so that lenses in my glasses had to be made stronger and stronger. The fear of hereditary blindness was uppermost in my thought, and at the time I became interested in Christian Science, it was necessary for me to hold a book about six inches from my eyes in order to read. I finally got to the point where I had difficulty in carrying on my teaching duties, so I went to the Christian Science Benevolent Association Sanatorium in Chestnut Hill, Massachusetts, for two weeks.

While there I enlisted the help of a practitioner, who worked with me daily and directed my thought in Truth. Toward the end of the second week, en route to the practitioner's office, I suddenly realized that I was reading the advertisements in the subway car, advertisements which previously I had never seen. When I reached the street, a new world was opened for me—everything was so big and bright and beautiful. I was almost overcome with joy and gratitude; I knew how the blind whom Jesus healed must have felt. The next day my glasses were uncomfortable, and upon removing them, I realized that I could see much better without them.

Send a comment to the editors
NEXT IN THIS ISSUE
Testimony of Healing
Blessings, gifts from divine Love,... 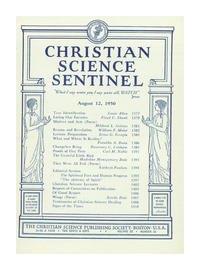