THE HUMAN YIELDS TO THE DIVINE

One learns through the study of the Christian Science textbook, "Science and Health with Key to the Scriptures," and other writings by Mary Baker Eddy, the God-sent messenger who discovered and presented Christian Science to the world, that the healing and regenerating influence and power which restores the perfect sense of health and establishes harmonious relationships operates in human consciousness and purifies it of its beliefs in a material state of being. This change in consciousness is made manifest in what we call outward conditions. Explaining this process in "Unity of Good," Mrs. Eddy tells us (p. 11): "He [Jesus] showed the need of changing this mind and its abortive laws. He demanded a change of consciousness and evidence, and effected this change through the higher laws of God."

Christian Science, the Science of true being, reveals the "higher laws of God" to its followers and teaches them how through obedience to these laws they may overcome every argument of the carnal mind and prove its powerlessness. 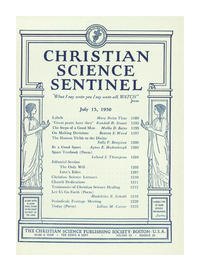