THE VALUE OF SPIRITUAL FACTS

Distant hills often seem steep and forbidding. Even in moderately level country the road just ahead sometimes appears to turn steeply upward. The motorist may wonder if his car is equal to the seemingly difficult climb. Soon, however, he finds that he has passed beyond the point where the highway appeared to rise abruptly. It was merely an optical illusion.

In Christian Science we learn to turn away from material beliefs and determine the spiritual facts of being. It makes no difference whether a problem be one of illness, lack of supply or employment, an unhappy home or business condition, or some other manifestation of error. Always its illusory character is disclosed when we turn the clear, white light of spirituality upon the problem. 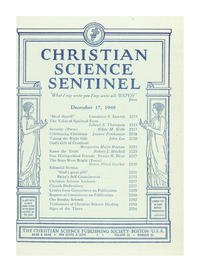