Daily Bread for All

An inspiring story of the manner in which the Lesson-Sermon reached Christian Scientists in France during the early war years came to light recently. After France's capitulation in 1940 it was impossible to send copies of the Christian Science Quarterly into Occupied France. However workers in Unoccupied France rewrapped large numbers of Quarterlies sent there for shipment to the three Christian Science churches in Paris. When the first shipment to Unoccupied France arrived from B"Mo!i and the Quarterlies were rewrapped. the one in charge of this activity, in making out the declaration, designated the packages to be sent over the border its printed matter. But the exchange of printed matter between the two section of the country was prohibited, and the parcels were refused by the postmaster. Three attempts were made to send them, and each time they, were refused. Turning to her Bible, the Christian Scientist found these words in the third chapter of Revelation: "Behold, I have set before thee an open door, and no man can shut it." She again took the packages to the post office. This time they were marked livret, which can mean a piece of music or a little book. The same postal employee who had three times before rejected the parcels now accepted them.

Send a comment to the editors
NEXT IN THIS ISSUE
Testimony of Healing
Feeling so much gratitude for the... 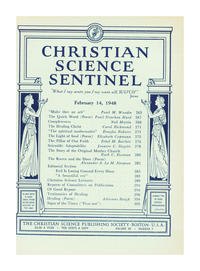