In studying the fifth chapter of Matthew's Gospel, which comprises a portion of that illuminating and inspiring discourse known as the Sermon on the Mount, the writer has more than once been impressed by Christ Jesus' emphasis of the eternal perfection of God, the Father of the universe, and of man, who exists to manifest His perfection.

His instructions are so simple, straightforward, and direct that the child is often more efficient in his application of them than the adult. The kingdom of heaven, he declared, belongs to those who are, not those who hope to be or talk about being, "poor in spirit"; whereas they who are meek, not just trying to be meek, "inherit the earth." Only those actually hungering and thirsting after righteousness are fed, and the actively merciful, the pure in heart, and the peace-maker —each has his reward. 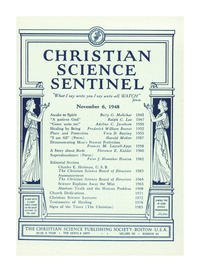