LEARNING THE SPIRITUAL NATURE OF ACTION

Throughout the writings of Mary Baker Eddy are rousing declarations which, if heeded, lead to a comprehension of God as the only source and creator. Every statement made by Mrs. Eddy was based upon her demonstrable understanding of the divine revelation which was vouchsafed to her. Students of Christian Science are sometimes tempted to be impatient or discouraged because the spiritual significance of some of her statements unfolds slowly to their understanding. But when sincere desire for growth in grace holds sway in their thinking, then the need for further unfoldment impels them to more study and prayer. Thereby they are tenderly led to wider vision, clearer understanding, and successful demonstration.

The writer had just such an experience in connection with that powerful declaration in the Christian Science textbook, "Science and Health with Key to the Scriptures" by Mrs. Eddy (p. 283), "Mind is the source of all movement, and there is no inertia to retard or check its perpetual and harmonious action." He was employed in an engineering industry in which he was not proving successful, and his finances were at a low ebb. The power of Christian Science had been previously demonstrated to him in other ways, so in this need he prayed to be given a better understanding of the harmonious action of life and its divine source. 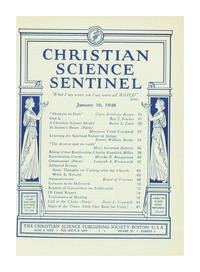