The Sure Reward of Persistence

"Success in life depends upon persistent effort, upon the improvement of moments more than upon any other one thing." This observation by Mary Baker Eddy is to be found on page 230 of "Miscellaneous Writings."

Often valuable lessons may be learned from quite commonplace occurrences. While waiting for a train a student of Christian Science watched the demolition of a cast-iron pillar. Three men used sledge hammers, and for three or four minutes directed their blows at the pillar with steady persistence until the resistance of the metal was broken and the pillar collapsed. Some weeks afterwards, when an obstinate, erroneous belief was claiming the student's attention, the operation just described came vividly to his thought and its processes were analyzed. 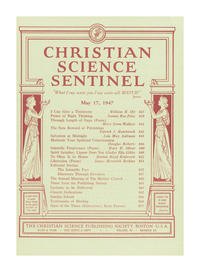