"The prince of this world cometh, and hath nothing in me" (John 14:30). Jesus' words are clear when one understands that the carnal mind is "the prince of this world." Discouragement is one of its favorite weapons. The temptation to be discouraged may come to everyone, for temptation is, in brief, a false sense of attraction, that which would draw thought from the contemplation of things spiritual to the pains and pleasures of material sense. But, without response, temptation has not even a semblance of power. Temptation plus response results in sin. Temptation is from without, response from within. That is why we can do something about it. Temptation accepted brings discouragement and defeat. Temptation rejected brings victory and progress.

We should flatly reject the arguments which tempt us to believe that our work is unavailing, that the promise tarries, that we are forsaken and frustrated, that we have failed. No matter how deeply entrenched the belief, how lengthy its duration; whatever its painful aspects, its incurable label; however complex the tangle of human relationships, fear not! All false beliefs of a so-called material existence yield in the degree that the spiritual laws of Life, God, are apprehended, appreciated, and applied. 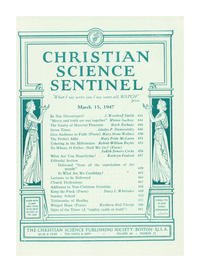