FROM CHAOS TO COSMOS

Arresting in both its simplicity and its profundity is the statement by Mary Baker Eddy in her book "Unity of Good" (p. 56), "The chaos of mortal mind is made the stepping-stone to the cosmos of immortal Mind." A demonstration of this sequence is based upon the self-evident premise that the reverse of error is true. A dictionary definition of "cosmos" is: "The world or universe considered as a system, perfect in order and arrangement: opposed to chaos. Hence, any harmonious and complete system evolved out of complex details. Order; harmony." The cosmos considered as the material universe, including man, is but a hint of the glorious spiritual cosmos, whose noumenon is divine Principle, God, the cause whose phenomena are perfect, from the infinitesimal to infinity. A careful study of all the references to cosmos in Mrs. Eddy's prose works, together with their preceding and following paragraphs in some instances, will richly repay the student who wishes to pursue this subject further.

Christian Scientists have become quite accustomed to correcting the disorders, diseases, and inharmonies of the human body through their understanding of the fundamental fact that God, good, alone is cause and creator, and that His creation, including man and the universe, must necessarily be good. Acknowledging the universal, inexorable laws of God, they repudiate the lawless so-called laws of supposititious mortal mind and its subjective condition, matter, and this correct reasoning reveals health, harmony, and orderly action to be the natural status of man. 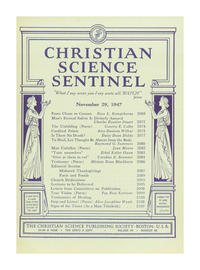