I have thought for a long time...

I have thought for a long time that I should like to write a testimony and tell something of what Christian Science has done for me. Although I had heard of this religion and had read some of the literature, I had not thought much about it. I had been a sincere Bible student since childhood and believed that God would heal disease if we had faith enough. So when my daughter was healed after the doctors had told her she must have an operation I became interested and wanted to learn how it was done. My daughter brought me the textbook, "Science and Health with Key to the Scriptures" by Mary Baker Eddy, and some of the literature.

I have had many blessings from my study, and I thank God for this Science, and that I have learned a little about how to use it. I was healed of grief when loved ones passed on. Friends marveled at my going through the experience so calmly. A few years ago I was attacked very suddenly by something like rheumatism. It was winter and I was living alone. I could hardly move my arms, and it was with great difficulty I dressed and undressed myself. I could not lie down and rest because the pain was so severe, so one night when I was in great distress I sat in my chair and declared the truth. I knew that nothing's impossible with God. I repeated "the scientific statement of being" (Science and Health, p. 468) and many other passages I knew. After working in this way, I said, "Oh, God, what shall I do now?" As if a voice had spoken I heard the words, "Lie down and rest." I felt better and found I could lie down without much discomfort, and after a while I slept. When I awakened in the morning I arose and dressed myself with little difficulty and went about my housework as usual. I knew I was healed, and in a few days I forgot about the condition. It has never returned. At another time I was suffering from pleurisy and a severe chest cold. It seemed as if I were threatened with pneumonia. A practitioner was asked for help, and when fear and resentment were uncovered and cast out. I was healed. Many times I have found lost or misplaced articles by turning to God to direct me. 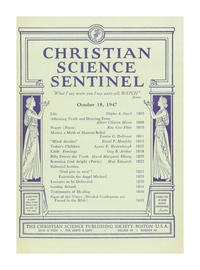