The Conquest of Fear

In "Science and Health with Key to the Scriptures," Mary Baker Eddy, the Discoverer and Founder of Christian Science, writes (p. 542), "The belief of life in matter sins at every step." This statement is illustrated in the dream narrative of Adam and Eve. The entire account of these two characters is a succession of mortal discords, all based on the belief that man is an individual entity living in matter, separated from God, and subject to the claims and so-called laws of mortal mind.

The moment in which an individual accepts the belief that he lives in a material body, and that he is part of a material universe, he experiences feelings of insecurity. The trembling of the men of Israel before Goliath, the externalized object of their own fears, shows how mortal man shrinks in terror from the phantoms of his own beliefs, his misconceptions of creation. 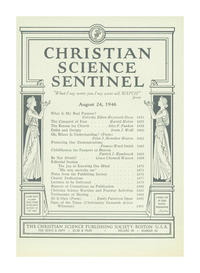