I have been a student of Christian Science for some years, and have received many blessings during this time. I should like especially to express my gratitude for the protective power of God as demonstrated by Christian Science in a recent experience I had when our house was wrecked by a flying bomb.

It was early one Sunday afternoon when one of these missiles fell in the garden, and the room in which I was standing caught the full blast from the explosion, shattering the windows and breaking down the roof. I was buried under the debris. Though scarcely able to breathe for the choking dust, I reached out in faith to God and at once felt completely safe in His presence. When I realized that I was bleeding profusely, I immediately declared that blood does not give life but that God is my Life, and all fear left me.

Send a comment to the editors
NEXT IN THIS ISSUE
Testimony of Healing
When a young girl I became... 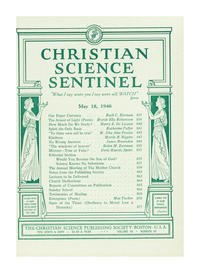