In Science and Health Mrs. Eddy...

In Science and Health Mrs. Eddy states (p. 425): "Consciousness constructs a better body when faith in matter has been conquered. Correct material belief by spiritual understanding, and Spirit will form you anew." I have proved the truth of these words.

Eight years ago I was very sick with bleeding piles, from which I had suffered for several years. A doctor told me I could be cured only by an operation, which I dreaded. A member of my family was very much interested in Christian Science, and asked me to try it. I was doubtful about doing this, but after spending two hours with a practitioner I felt new life pouring into me as she told me of God's love and how I might claim my inheritance. This she explained to be good alone, because God made only good. She also told me man was made in the image and likeness of God. I decided that night I should read Science and Health and declare the truth as she told me to. Within seven days I was completely healed. For this healing and many others I have had in Christian Science I am deeply grateful.

Send a comment to the editors
NEXT IN THIS ISSUE
Testimony of Healing
In the year 1886, I became interested... 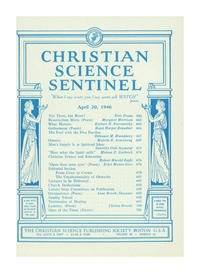