I am deeply grateful for all the...

I am deeply grateful for all the healings I have had in Christian Science; but the one that stands out most to me was the discarding of laxatives, which I had been using since childhood. This healing took place twenty years ago. Although I had been interested in Science for only two months, and did not understand very much about it, I was completely and permanently healed within one half-hour. This was accomplished with the help of a practitioner. With the physical healing came an awakening, and a strong desire to know more about Science.

I wish to express my gratitude for a beautiful healing which my daughter, aged five, experienced. One Saturday afternoon she went sledding down a steep hill, lost control of the sled, and ran into a stone house. The left side of her face, including her forehead and eye, was badly swollen and she was apparently in a semiconscious state. A practitioner in another city was immediately called, and help was lovingly given. The injury seemed quite serious, as there was evidence of internal bleeding. On Sunday evening the swelling of the forehead was gone and she ate a light supper. At the end of the first week the discoloration had entirely disappeared and the eye had begun to open. At the end of the second week the eye was open, but it was not so widely open as the other, and I found there was something in her thought which needed to be healed. She was looking for attention. When this was corrected, the eye healed perfectly. This was at the end of the third week.

Send a comment to the editors
NEXT IN THIS ISSUE
Testimony of Healing
I wish to express on gratitude... 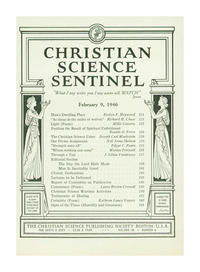