In "Miscellaneous Writings" the Discoverer and Founder of Christian Science, Mary Baker Eddy, says (p. 127), "One thing I have greatly desired, and again earnestly request, namely, that Christian Scientists, here and elsewhere, pray daily for themselves; not verbally, nor on bended knee, but mentally, meekly, and importunately." It is noticeable that she uses the word "importunately."

When, at their request, Jesus taught his disciples the most beautiful of all prayers, since called the Lord's Prayer, he immediately pointed out to them the necessity of insistence in prayer. Using a parable to make his point, he described the man who felt obliged to rise at midnight to lend three loaves of bread to the friend who asked for them at such an unusual hour (Luke 11:5-8). 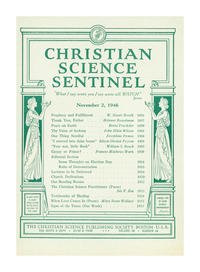