When the writer of the third chapter of Genesis likened evil to a talking serpent, he showed he understood that evil always presents its arguments as suggestions. This is its only approach to human thought. Once we learn how to silence, in our individual consciousness, negative evil suggestions with the positive ideas of God, good, we are definitely started on the way to health, happiness, and immortality.

A careful perusal of the writings of Mary Baker Eddy shows that some of the verbs she often uses to describe the activity of evil are "says," "suggests," "argues," "claims." They indicate the method of evil. Its modus operandi, or method of working, is to talk, suggest, and argue to human thought. If what it suggests is accepted as fact, its purpose to substitute lies for facts has temporarily succeeded. 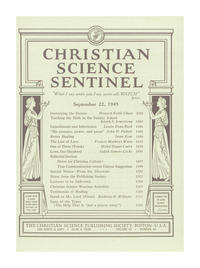