It is with sincere gratitude to...

It is with sincere gratitude to God that I submit this testimony. In 1938 I was taken very ill, and was in much distress. At the time, I was employed as a governess by a family who were not interested in Christian Science. A doctor was called, who diagnosed the case as a malignant tumor and declared an operation imperative.

Previous to this I had been studying Christian Science. I visited a practitioner, and in seven days the healing took place. My employer insisted on a medical examination before I again took up my duties. I consented, knowing that Christian Science had healed me. I visited a nationally known diagnostician, who gave me a thorough examination and found no trace of the difficulty. There has never been a return of the trouble. 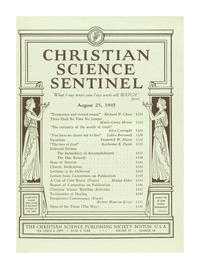