Because the usher is the first to greet the members of the congregation and the stranger within the gates, his office is an important one. His desire to reflect the divine consciousness requires constant, consecrated activity. While his thoughts should spontaneously go out in healing to all, he needs also to be able to discern and detect the spiritual needs of those whom he greets. Mary Baker Eddy's statement in the Christian Science textbook, "Science and Health with Key to the Scriptures" (p. 95), gives us an unfailing standard for measuring our position. She says, "The greater or lesser ability of a Christian Scientist to discern thought scientifically, depends upon his genuine spirituality."

At a time when world tension is so great that the claims of materiality appear to be mounting higher and higher, many individuals are feeling that there is little they can do to help solve their own or the world's problems. Many seemingly hopelessly involved in such thinking are saying, like Job (23:3), "Oh that I knew where I might find him! that I might come even to his seat!" They are seeking the sanctuary and comfort which can be found only in fellowship with God. Jesus recognized that the supreme need for all time was this abiding in the "secret place," thus maintaining the consciousness of man's unity with the Father. Mankind in general is reaching out for a peace that is not only a diplomatic gesture, but a way by which each individual can be assured the right to shape his country's future, build his home, and live his life in peace. 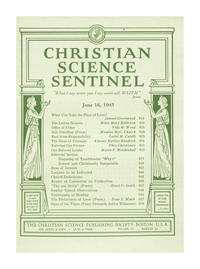